Khastegāri is the first step of the traditional Iranian marriage process. In the olden times, when it was time for a young man to get married, his family would look for potential brides who came from family’s of similar standing in the community. Once the man, or his family, had decided on a potential bride, the Khastegāri process would take place. In modern Iran, this practice is replaced by the courtship of the man and woman and their mutual decision to start the khastegari process.

For this ceremony, one or more representatives of the man’s family would visit the woman’s family. The first visit could be for the parties to become acquainted. At each visit, the man’s family would present a bouquet of flowers and the woman’s, as good hosts, provided tea, fruits and sweets. Both the woman and the man had their say in whether or not they would like a follow up on the visits. Once both parties had established serious intentions for the relationship, the man’s family would bring sweets and a larger bouquet and officially ask the question. In modern day Iran, the Khastegari is a one-time formality. It is a sign of respect to the parents of both parties and for them (as wiser/elders) to have their thoughts shared with the potential future bride and groom.

At the Second Khastegāri a marriage proposal is made by the suitor and his family. The woman’s family welcome the party and invite them to sit in the reception room.

At first, members of the bride’s family talk about the virtues of the girl. Traditionally, modesty was among the most highly valued qualities, along with domestic skills like cooking, embroidery, and entertaining at social gatherings (Mehmān Navāzi). Less emphasis is placed on these characteristics nowadays. In modern times important characteristics are the education level and intelligence of the girl, her ability to make the most of the situation when times get tough, and her future prospects. After hearing about the potential bride, the man’s family will discuss his own merits, usually his education and/or career prospects. The woman’s parents will normally ask the suitor if he is able to provide her with accommodation, and if he is able to support their daughter financially. They may also discuss any religious commitments.

The most important part comes when the bride’s father calls for the tea to be served. In the most traditional families, the first time that the man and woman see each other is when she enters to offer tea and pastries to the guests. At the end of the second Khastegāri, the man and the woman will be given time alone to talk in private. This usually involves a discussion about what they want for the future.

It is important to note that, nowadays in most families, the first two Khastegaris are done in one step. Usually, the man and the woman already know each other and are the ones who have instigated the ceremony.

Baleh Borān is the ceremony which takes place a short period of time after the formal proposal, publicly announcing the couple’s intention to form a union. At this stage, both the man and woman are happy with each other and, traditionally, both their families have agreed to the union and any conditions surrounding the marriage.

The groom’s parents usually give a gift to the bride at this ceremony. According to an ancient Zoroastrian practice, this is done by the groom’s family in order to persuade the bride to accept the proposal. The traditional gift is a ring.

Hana Bandān (Azerbaijani: Xına Gecəsi ) is the ceremony held one day before the wedding in the home of bride and groom. It generally takes place at the girl’s home and among women, although either side can choose to host it. It is very popular in Iranian Azerbaijan region, neighboring Azerbaijan Republic, and Turkey. Usually dry henna brought by the bridegroom’s family is broken to pieces in a silver or copper vessel by a woman whose father and mother alive, not experienced any separation. After preparing the bride, veil ornamented with red flake is placed over her head, and she is brought into the middle with hymn and folk songs about henna.

Henna that has earlier kneaded with water is brought in on a tray surrounded by candles and placed in the middle of the room. In some places, the henna is first put on the hands of the bride and then distributed to the guests; in other areas the henna is first distributed to the guests, and only after everybody has left is it placed on the bride’s hands. If the woman so wishes, henna can also be placed on her feet and hair.

Considerable attention is paid to charging a woman with a happy marriage to knead and distribute the henna and apply it to the girl’s hand. The woman places the henna on one of the bride’s hands, and a young girl places it on the other. Before the henna is applied, coins or gold are also placed in her hands. After woman who came together for dying henna leave, close friend of the bride remain with her and enjoy themselves till morning.

The Nāmzadi ceremony takes place at the bride’s family home. The man and woman, alongside their families, will determine “the gift of love”, known as the Mehriyeh, as well as the date of the wedding. This may be held as early as a year before the wedding itself, in order to allow time for all the wedding arrangements to be made.

The Iranian engagement ceremony, known as the Nāmzadi, involves the bride and groom exchanging rings, followed by a reception and/or party. 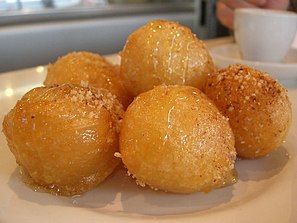 It is tradition to eat Bamieh sweet in the Shirini-Khoran The sharing of refreshments that follows the Nāmzadi ceremony is called Shirin Khorān (Persianlit. eating sweets) including tea and Persian desserts such as bāmiyeh (light doughnut balls), Nān-e berenji (rice flour cookies), chocolates, ājil (nuts and dried fruit), are served as part of the festivities. Eating sweet food stuffs at celebratory events such as an engagement ceremony carry symbolism such as wishing for sweetness in the couple’s life in general.

The Jahāz Barān also known as Tabagh Barān (Persian:طبق بران) ceremony is a few days before the wedding, presents from the bride’s family are taken over to the groom’s house. Men from the groom’s family dressed up in festive costumes carry the presents on elaborately decorated large flat containers carried on their heads. The containers are called tabagh (Persian). This ceremony is also called Tabagh Bārān. Although this tradition might be practice in small towns and villages but in cities, such as Tehran, means of transportation is used deliver the gifts to the bride.

The sofreh aghd is a traditional wedding ceremony spread where legal marriage and ceremonial traditions are exchanged. The ceremonial traditions have been practiced for thousands of years, and sofreh aghd spreads are usualy very customary at Persian weddings. Like most, Iranians have diverse religious backgrounds and the sofreh aghd is a chosen cultural ceremony commonly practiced regardless of faith. There are many symbolic items which make up the sofreh aghd spread, all in which represent an element of the couple’s new life together. The word “sofreh” means “spread” and “aghd” means “ceremony.”

While most aim to keep the traditional elements of the sofreh design, each sofreh is unique in its own and designed around the bride and groom’s style. Every sofreh aghd design has traditional must-haves; however, based on the taste and budget of the couple, some sofreh designs are more elaborate and intricate than others, while others are more simple and understated.

Below is a visual guideline and list of some of the traditional pretties that make up the sofreh aghd:

|| AYENEH {Mirror} || Represents bringing light and brightness into the future for the married couple. Traditionally the couple look into the mirror together.

|| SHAMDOON {Candles/candelabras} || Symbolize energy and clarity in the couple’s life together.

|| NOON-E SANGAK {Persian Flatbread} || A decorative display of flatbread “noon-eh-sangak” symbolizes prosperity for the feasts and couple’s life together. It can be accompanied with feta cheese (“noon-o-panir”) and fresh herbs.

|| SHAHKHEH NABAT {Rock candy} || Prettified to symbolize a sweetened life for the newlyweds.

|| SEKKEH {Coins} || Are place on the sofreh spread to represent wealth and prosperity for the couple.

|| ASAL {Honey} || Consumed right as the ceremony is going to conclude. The bride and groom exchange hands (usually with the small finger) dipped in the honey and shared off the hand to represent sweetness for the couple’s life.

|| HOLY BOOK OF CHOICE {Quran, Bible, Torah, or a book of Iranian poetry such as Hafez} || Placed on the sofreh aghd to symbolize God’s blessing for the couple. The book is usually opened from the middle and placed on the spread in front of the couple as a symbol of faith.

|| SHIRINI {Sweets and pastries} || Are placed on the sofreh aghd and are to be shared with the guests after the ceremony concludes. Shirini symbolizes the sweetness of life.

|| TUREH GHAND {Sugar cloth} || A fine fabric which is held over the couple’s head throughout the ceremony by various happily married female relatives and friends.

|| ESFAND {Wild rue} || Is an herb which is burned as part of a ritual (in the coal brazier) and is a tradition for purification. It doesn’t always have to be burned and can be used as decorative display.

|| MANGHAL {A coal brazier} || Is used to burn wild rue (esphand) to drive away negativity and anything evil.

|| TRADITIONAL PERSIAN EMBROIDERED CLOTH {Termeh} || A traditional Persian silk or embroidered cloth handed down from generation to generation to symbolize family and tradition. It is used as a decorative display with the rest of the traditional items.

|| SOFREH OVERLAY {Ceremonial cloth} || Is the spread used under all of the traditional sofreh items.

|| MOKHADDEH {Bride and groom’s seating} || Usually stools or some sort of cushion seating for the bride + groom to sit on during the ceremony exchange.

Traditionally, on Pātakhti the bride wears a lot of floral ornaments and the decoration of the house with flowers is provided by the groom’s family. It is similar to American Bridal shower. The relatives of the bride and the groom bring them presents. This is usually more of a party with finger foods, sweets and drink than a sit-down dinner. The majority of the night is spent dancing and socializing. It’s almost like a bridal shower, but is held after the wedding.

Pagoshā, which literally means opening leg, is a ceremony held in the house of newly married couple’s relatives. Runamā () is the name of the gift that is usually given to the bride and groom by the relatives. The couple’s new status as “a family” is celebrated this way. In Iran, where families are a lot bigger and there are more of them around to throw parties, it is usually a very exciting and exhausting time for families of the bride and the groom who are invited to one Pagosha after another for several weeks following a wedding.

Mādarzan Salām literally hello mother in law is generally the morning after the wedding ceremony when groom visits his mother in law and gives gift to her.

Mah-e Asal is a vacation spent together by a newly married couple. Northern provinces of Iran such as Mazanderan, Golestan and Gilan are very popular destinations for honeymoon. In recent years cities of Turkish Riviera such as Antalya and Alanya are attracting more Iranian newly married couples because of no visa requirement between Iran and Turkey.